Group portrait of members of the shooting guild in Antwerp, David Tenirs the Younger 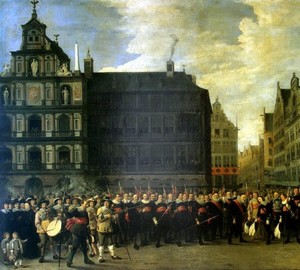 Group portrait of members of the shooting guild in Antwerp – David Tenirs the Younger. 1643. Wood, butter. 133×184.5
The Hermitage painting was the first big custom work of Tenirs and was intended for the hall in which the assemblies took place, in the house of the shooter guild. In this building she was until 1749, but then due to the financial difficulties of the guild, the canvases of Tenirs the Younger (together with the “Chief of the Winner” of Rubens, now stored and the Kartin Gallery of Kassel) were sold to the Dutch artist Gerard Hutu.

The action of the picture unfolds on Grot Markt – the main square of Antwerp. On the left you can see the town hall (1561-1565, architect K. Floris). The artist shows the severity and simplicity of the right wing of the building, which contrasts with the central protruding part of the facade, saturated with decorative details and energetic in plastic. The left side of the town hall, cut off by the frame, is not visible. A giant trilingual pediment, twin columns, niches decorated with statues of Madonna and Baby on a Crescent (apparently Immaculate Conception), Justice and Wisdom all give the impression of the extraordinary wealth of architectural forms. By the accuracy and thoroughness of the very small details, Tenirs, as it were, expresses its respectful attitude to the monument of power of Antwerp. To the right of the town hall is Zilversmidstraat (Silver affairs of masters) with buildings of the XVI century. In the extreme right building (Huys van Spanien Spanish House), the facade of which is decorated with a red canvas with emblems, was the Oude Voetboog guild, organized in the XV century.

Creating this large canvas, Tenirs did not resort to the help of other masters. Unlike architectural artists (in particular, painters from the van Stenwijk family or the Neffs family), specializing in and depicting interiors and exteriors of churches, Tenirs himself drew both an architectural background and portraits. In the Tenirs picture, the figures of the first plan and architecture are so organically correlated with each other that they are perceived as inextricable parts of the whole. Through the window openings of the town hall, figures are also visible that visually contribute to the unity of the work. Thanks to the well-published proportionality, a person is in a harmonious connection with architecture. Therefore, the characters of Tenirs do not seem lost in the crowd.

Various assumptions were made about the plot of this work. For example, van der Branden (1883) believed that a parade was presented on the canvas on the occasion of the anniversary of the dean of the Godevard Siaders guild. According to Klinge (1991), the definition of the plot made by van den Branden is hardly legitimate due to the lack of documentary evidence. She, like Delen (1930), rightly notes that the parade of the oldest Oude Vbetboog guild in Antwerp is taking place on the square, and her dekan, as a rule, was the burgomaster of the city. Guild members are depicted in black suits with red belts. In three elderly characters (probably guild leaders), the red tape is tied over the shoulder. In order to diversify the monotony of black spots and saturate the picture with color, Tenirs depicted some guild representatives in yellow suits (in particular, drummer and standard bearer).