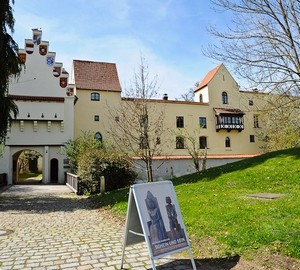 In the South of Munich, outside the city limits, on the banks of the river ISAR is one of the most interesting and picturesque castles of Bavaria Grunwald. It was built in the middle ages on the site of an old Roman watchtower. Despite the fact that for 800 years, he several times seriously rebuilt and improved, and has retained a medieval atmosphere attracts tourists. In the vicinity of Munich survived only two such lock (second Blutenburg).

Initially Grunwald was the residence of the counts Andec, then came into possession of the wittelsbachs, the Bavarian Dukes. The Dukes became rich, the castle became close. For a long time it was used as a hunting Lodge, prison, gunpowder warehouse. In the 17th and 18th centuries, the castle was partially destroyed, the river washed away the mountain. Completely lost the old fortifications, the Gothic chapel and many outbuildings. But, the main tower, dwelling, inner fortification perfectly preserved.

In the late 19th century, the castle passed into private ownership, and in 1976 the government of Bavaria buys it from the owners to post here a branch of the Bavarian archaeological Museum. The exposition of the Museum allows visitors to discover the history of Grunwald, as well as castle life during the thousand years: the blacksmith shop, the dungeon, which contained a famous in Europe alchemist, and in fact an adventurer and a rogue, count Cayetano, who actually was the son of Italian peasants, armor, prints, and drawings, drawings and layouts.

Several rooms given over to the archaeological collection from the Roman period. And in the courtyard of the castle there is a medieval well, in more recent times converted into a fountain.

The exhibition presents the personal belongings of the owners of the castle, valuable works of art, well preserved medieval frescoes.

The tower and fortifications of Grunwald offers stunning views of the ISAR valley.

The castle hosts an annual festival as well as concerts and educational events. Workers Grunwald will help to organize a children’s celebration in medieval style.

To become better acquainted with the castle and all exhibitions, it is better to visit this place on Sunday. This day always held a variety of events, performances of musicians.

Full ticket that includes a visit to the core exhibition, temporary exhibitions and watch towers will cost EUR 3.50. If you plan a visit to the tower of 1.00 Euro. In grünwald regularly organizes group excursions accompanied by a guide. In this case, you need to pay 2,50 Euro. Discounts on the entrance fee expects students.

Shop Grunwald is full of unusual Souvenirs that are useful in agriculture.