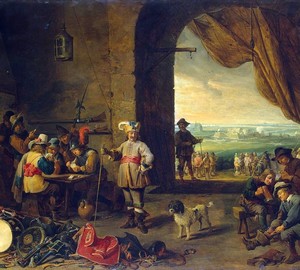 Guard – David Tenirs the Younger. 1642. Wood, butter. 69×103
David Tenirs the Younger created the “Caraulnu” in 1642, when “the new ruler of the Spanish Netherlands, Francisco de Melo, twice defeated the French troops, which allowed a short strike from Antwerp” (Kling 1991). The battle depicted in the background is perhaps a kind of echoes of these events. Based on these historical facts, Kling (1991) believed that the ermitage work contains three (main elements (military still life; characters in the genre scene; landscape background with figures), expressing the general idea of military power, protecting the country and the Scheldt River. Along with the historical background, the Flemish artist introduces a theatrical beginning into the traditional plot of “Karaulni”. Thanks to the richness and juicy of bright colors, the Tenirs painting makes a festive impression. The advance stage is occupied by a luxurious still life of knightly armor, flags, attributes of military music (drum, trumpet, litaurus) and weapons. The central place in the picture is given to the head of the guard in a elegant suit, standing in a spectacular position. This figure binds the second-plan characters together (in the left and right parts) and at the same time gives the eye the opportunity to penetrate the arch. The curtain hanging here further accentuates the theater note. It rises, opening the landscape view and additional “stage” space. The panoramic landscape includes an episode of the siege of the fortress by a military unit.

Almost all authors are unanimous in evaluating the Karaulni Hermitage, recognizing the picture of one of the best among Tenirs’ many works on this plot.