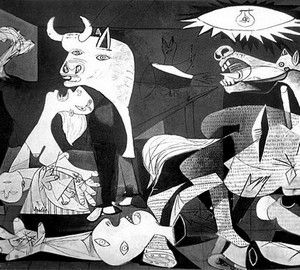 Picasso Expressive Canvas 1937. was a public protest against the Nazi bombing of the Basque city of Gernik. His picture is full of personal feelings of suffering and violence.

In the right part of the picture, the figures run away from the burning building, from the window of which the woman falls; on the left, the sobbing mother holds her child in her arms, and the triumphant bull tramples on the fallen warrior. A broken sword, crushed flower and dove, skull (stucked inside the body of a horse) and a pose of a fallen warrior resembling a crucifixion – all these are generalized symbols of war and death. The bull symbolizes cruelty, and the horse symbolizes the suffering of the innocent.

Together, these frantic figures form a semblance of collage, secreted by silhouettes against a dark background, brightly lit by a woman with a lamp and an eye with an electric light instead of a pupil. Monochrome painting, reminiscent of newspaper illustrations, and a sharp contrast of light and darkness enhances powerful emotional impact.