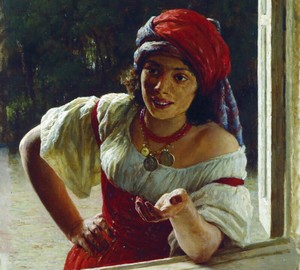 The author is characterized by single-figure sketches: this category includes such works as “Cochegar”, “Cursistka”.

But it should be remembered that the painter painted only those persons who interested him from a spiritual point of view: they should have expressed some kind of uniqueness, paradoxically combined with universality. We see this contradictory unity in the face of the gypsy depicted in the picture.

It stands out against the background of dense vegetation behind, but the viewer feels that in the essential sense between it and nature there is no clear boundary. It is clear that she is not a person formed by society. The naturalness of the gypsy is emphasized by the fact that she looks out the window, and does not look out of it.

It belongs to another category of people, now almost descended from the life scene, and once common, people who can rightfully be considered creations of nature, not society.

Already in the 19th century, Yaroshenko looked with some amazement at this “wandering look”. He had a desire to fix on the canvas that would inevitably go away. To convey to contemporaries the very fact of the existence of such a miracle, to preserve memory. Finally, to understand for yourself what lies inside this mobile nature, and possibly to adopt something.

It seems that the frame of the picture is a window frame, and the gypsy is in reality looking at us. Her temperamental pose and gaze give out a willingness to resist or rush into battle. Her weapon is unbiased cunning.

It is safe to say that she is invincible.