“Hands of the Praying,” Albrecht Dührer – overview of the painting 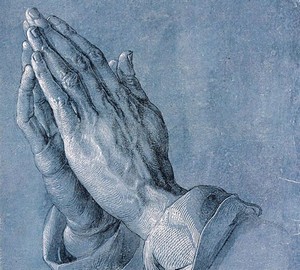 The hands of the prayer are Albrecht Durer. Around 1508. 29.1 x 19.7 cm
Hands folded in a prayer gesture. This drawing is the most famous of the heritage of Albrecht Dührer, an outstanding Renaissance master with a “German residence permit.”.

It is believed that the drawing was performed by a painter as a training session before working on the central part of the “Heller Altar”, the famous triptych for the Dominican monastery, which Dürer created in collaboration with Matthias Grunewald. Careful work was fully justified – the altar itself and all the sketches to it became a great work of art.

It was important for Dührer to portray hands with anatomical accuracy. As a “model”, the master took his left hand … Yes, yes, it was the left. We see one hand of the master in the figure, and the right hand was depicted using a mirror in which the left was reflected. However, there is another theory that says that in the drawing of the hand of Brother Durer.

In addition to the hands, the head of the praying apostle was still depicted on the big sheet. Later, the drawings were divided. It is interesting that the author retained all his “training drawings” as some kind of cheat sheets, and later used already worked out elements in other paintings.

The “hands of the prayer” are the most recognizable motive for the work of Dührer. The drawing not only has many reproductions, but even embodied in a sculptural form, as well as in the form of small reliefs (especially common in the USA).

In addition to artistic value, the drawing acquired great cult significance as a symbol of prayer, condolences, confirmation and generally religious affiliation.

But if we separate this laconic pattern on blue coated paper made with whitewashed and gray paint from cultural-religious meanings and meanings, we can make sure: the value of this work is not diminished at all. The incredibly accurate image of the hands of an elderly person with wrinkles and veins, written in dynamics with a certain character, cannot but admire and puts this drawing in the ranks of significant works of world heritage.