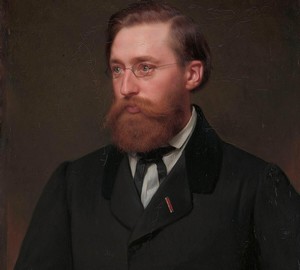 The beginning of the 19th century. In the art of Europe, an era of romanticism comes to the fore desire to display in pictures the feelings and emotions of people. There is a growing interest in the national traditions, history and mother nature.

Bright representative of the Norwegian romantic school of landscape painting was Hans Frederik Gude. The artist was born in Oslo on 13 March 1825. The ability to draw the boy appeared very early and at age 12 he begins to take his first drawing lessons from painter Johannes Flinto. The following year he attended the Royal art school in Oslo.

After three years of successfully graduating, a young man finds himself facing a difficult choice. Many novice artists, including Scandinavian, wanted to go to art school in Western Europe. The young people choose Germany, Academy of fine arts in Dusseldorf, enjoying great popularity. In 1842 he entered the newly opened class of landscape painting, which is a famous painter Johann Wilhelm Schirmer. During the study fully reveals the talent of Hans Gude.

After graduating from the Academy in 1846, he returned to Norway. The artist writes many romantic paintings with the species native to Northern nature. Majestic mountain peaks, cool lakes, waterfalls amaze the audience with its naturalness and craftsmanship.

After a few years Hans Gude accepts a teaching position at the Düsseldorf Academy and in 1854 became the youngest Professor. He has a lot of students from different countries, including Norway. The master pays a lot of time and effort to teaching and supporting their students, helping them financially.

The artist exhibited his paintings at many art exhibitions in Berlin, Paris, Vienna, where they win medals, including gold.

The growing popularity of the painter and in 1862 he was invited to England. The artist arrives in Wales, lives in the countryside and walks in the picturesque surroundings. It is a lot of fruitful work.

During a trip to the coast a huge impression on him produces the appearance of a stormy sea. Now a favorite theme of artists become seascapes.

Four years later Hans Gude returned to Germany, to Karlsruhe. He heads the “Baden art School of the Grand Duke”, and then remains at the school as a teacher of the landscape class. Passing students, which again a lot, your knowledge and experience, the wizard seeks to reveal the individual abilities of the students.

In 1880, the Academy of arts in Berlin invites him to teach and to elect a member of the Senate of the Academy. Here, he worked for more than ten years. Despite the fact that the master almost all the time living abroad, mother nature comes to life in his paintings.

In 1894 the prominent Norwegian artist awarded the Grand cross of the Order of St. Olav. But this is a new era – the era of impressionism, romanticism rooted in the past. Increasingly, the French school of painting. The number of students in class is reduced and in 1901 Professor left the Academy. Two years later, he dies in Berlin.

Hans Frederick Gude is a bright representative of romanticism, his paintings are justifiably proud of the many museums.