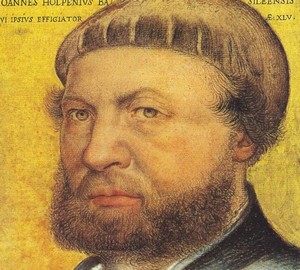 The artist was born in Augsburg in the family of famous painter Hans Holbein the Elder. His artistic style has been seriously affected popular masters of the era – Burgkmair Hans. At the beginning of his artistic career Holbein the Younger studied with his own father.

Together with his brother Ambrosius Holbein settled in Switzerland, in Basel. There he was surrounded by advanced scholars and thinkers of the era, including Erasmus of Rotterdam. At this time, the artist worked in the genre of illustration, doing work for the Bible and other books, including for the famous “Praise of folly” of his new friend. Among other activities were the stained glass Windows, wall paintings inside and outside of buildings, portraits.

This period in the biography of the artist is the first name is Basel, a master was created many works, including numerous portraits, religious paintings, including 10 paintings on the passion of Christ. From paintings of this period are especially well-known “Madonna of the Meyer family”, but also unique in its effect and unusual image of the painting “Christ in a coffin”. It is a narrow horizontal canvas depicts the dead body of Jesus Christ is so realistic and expressive that physically acts on the human perception.

At the end of the period Basel Holbein came to England (1526). In this country, he was noted only as a talented portraitist. Two years later he returned to Switzerland, to Basel, where he completed the frescoes in the town hall and painted a few portraits.

After four years of unrest on religious grounds Holbein was forced to return to England. The second English period lasted for nine years, at this time, the artist has managed to write a lot of portraits of famous persons that helped him become the court painter of the famous English king Henry VIII.

This period of the artist, which is also called Tudor, has preserved a few of the most famous images of the Royal family, including portraits of Henry VIII, one of his wives – Jane Seymour, and heir Edward VI.

Interestingly, in addition to paintings by Holbein created and sketches stunningly lush and spectacular outfits, which is famous for the king is a polygamist.

Creative artist’s style is easily recognizable. Who saw the portrait of king Henry easily identify the brush. His images are amazingly accurate and scrupulous study of details, craftsmanship with color and light, excellent transfer of volumes, shapes and textures.

Despite the fact that it realistically and accurately conveys all the details of his nature, ready canvases are striking decorative and impressive mastery of painting. Holbein is regarded as an artist who has managed to instill the ideas of the Italian Renaissance on German soil, without losing the specific national style. His painting is akin to works by Durer, although delivers reality in a completely different way.

Before the beginning of the scenic elaboration of the master always did a lot of sketches in which he paid much attention to the face and small details. Perhaps that is why his finished work produce so solid impression, and those characters are remembered from the first sight.

The master so often used in his works, colorful draperies, carpets and Oriental fabric that it was named after one of the types of embroidery and even the carpets with a characteristic pattern.