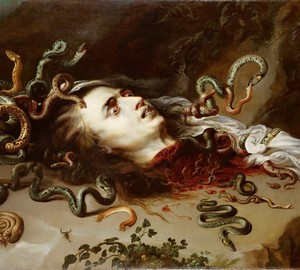 Having portrayed the head of the mythical Jellyfish of Gorgon, Rubens achieved what he wanted – scared, shocked, “thropped” his contemporaries, and I must admit, he did it masterfully. But the artist’s plan was not as simple as it might seem.

The plot Peter Paul borrowed from his “cumir” and the teacher – Caravaggio. The bloodied head of the mythical monster, with still living snakes instead of hair, capable of turning all living things into stone after death, was chosen by the great Rubens as a sign of warning to his compatriots about the hidden threat emanating from a seemingly past danger.

The picture, at the same time, strikes with an abundance of details, careful drawing of objects, moving snakes and insects, as on a very good still life of Dutch masters. The face of Gorgon is distorted by the grimace of pain, the eyes are wide open from fear of a terrible death, from drops of its blood more and more reptiles are born and spread to the sides. Before us is an allegory picture, a sign picture, a warning picture?