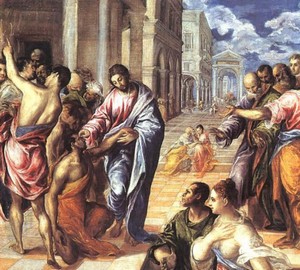 At least three times wrote the works on the plot of the healing of the blind El Greco (1541-1614). All paintings have a similar composition, but differ in the interpretation of parts. This picture is the earliest and includes a genre scene with a dog, which is not in other versions.

To understand the style of the presented work, you need to know that it refers to the period of the artist’s work when he arrived in Venice, became a student of Titian and was influenced by Tintoretto and Michelangelo. In the creations of this period, El Greco is still a Venetian in style, here he is not “real”: some figures have a clear resemblance to the figures of Tintoretto. So, for example, the figure and gesture of the old man in a green cloak (in the group on the right) literally coincides with the figure of Joseph in Tintoretto’s painting “Run to Egypt”, written in 1583 and stored in Scuola San Rocco in Venice. But Tintoretto’s work was written much later than El Greco’s painting! In the XVII century, it was attributed to Verones, later – Yakopo Bassano.