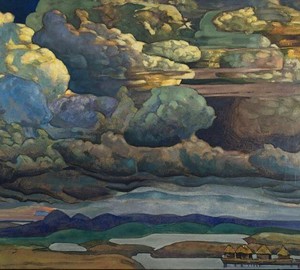 On this canvas, the quiet, calm and pastoral appearance of the earth with a stormy, covered with volumetric clouds of the sky is opposed. If everything flows smoothly and peacefully on earth, then a real battle is taking place in heaven. The clouds swirl, curl, fight each other, trying to oust one another from the sky. A strong wind is clearly blowing there, which is noticeable in pronounced, almost horizontal stripes.

But even a strong wind cannot cope with powerful clouds. They closed the entire sky completely, only a thin strip of the sky is visible at the horizon itself, but it is not quite clean – clouds gather on it too. They are still small, weak, but soon they will cover the whole sky above the ground.

And on earth at this time there is complete silence. A deserted village, consisting of small houses under straw roofs, peacefully napping over the quiet waters of a light blue lake. In the distance you can see the emerald hills and distant blue mountains, also quiet and serene. During the writing of the picture, Rerich was fond of antiquity, so the image of unusual, clearly non-modern huts on weddings becomes clear. This is the distant, very distant past of mankind, when the gods decided everything around, and the simple and understandable forces of nature caused panic horror.

The village was destitute from primitive fear of the eruptuous element. It is easy to imagine how in each of these tiny huts our ancestors tremble with fear, clogging in dark corners. They are clearly afraid of what is happening in heaven, this is a riot of elements that they take for the wrath of their gods.

The whole picture is designed in fairly bright but not intense colors. There are many shades of blue, blue, purple, green and yellow, but they all combine harmoniously without contradicting each other. The canvas looks solid, organic due to the use of halftones and mixing of colors. With the static image of the earth, the cloud-covered sky looks extremely dynamic. It seems that you can feel the wind blowing from the picture and the smell of moisture if you get close enough to it.

Given the proximity of the First World War and the general thunderous situation that prevailed in Europe at that time, one can find signs of another impending catastrophe in the picture. Then the stormy, with swirling clouds, sky may seem like a symbol of an approaching war, which is about to swallow an innocent peaceful village on the lake.