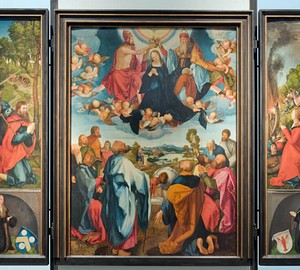 This wonderful work of art is distinguished by the wonderful composition of the masters who worked on it. Two talented representatives of German art – Durer and Grunewald – in close cooperation fulfilled this altar in the form of a classic church triptych. Almost a hundred years later, another artist, Harrich, made a copy of it, so this image has at least partially survived to this day.

The main part of the altar – the central element and internal sash – were performed by Albrecht Durer, or rather, by the artists of his workshop under his leadership and with his participation. Only four paintings for the outer wings on the right and left were ordered from Matthias Grunewald. The middle part of the altar of the Dührer brush burned down in the 18th century and we can only judge it by the preserved copy of Harrich.

Due to the fact that the monasteries went bankrupt and eliminated during the secularization period, the altar was divided into parts. That is why its individual preserved elements are now in various cities. 4 paintings of Grunewald have been preserved, of which “Saint Kiriak” and “Saint Lawrence” are now in Frankfurt, and “Saint Lucia” and “Saint Elizabeth of Tühring” in Karlsruhe.

Grilled paintings performed. This is a rather complicated technique of painting, requiring work only in tones of the same color, that is, in monochrome gamma. Thanks to this technique, it is possible to create a visual impression of the bas-relief, because due to the restrained selection of color, the image looks convex, voluminous.

This is a time-consuming image method, since paints have to be enjoyed with the finest strokes to reproduce the shape of objects. In portrait images, this is even more difficult to do. But Grunewald masterfully coped with the task. Despite the very limited color scheme, its paintings for the altar look spectacular, beautiful, not inferior in expressiveness to the colorful central part and sidewalls.

The faces of the saints are alive, with recognizable features of the face. Women portrayed by Matthias are very similar to the Madonna of Italian masters, for example, in the guise of a saint (presumably St. Lucia) you can find a resemblance to Venus Botticelli. At the same time, it resembles Judith from the famous canvas of Lucas Kranah the Elder, and many other female portraits of that time.

Despite the small number of surviving works of the master, we can judge him as one of the most significant and talented artists of the German Renaissance.