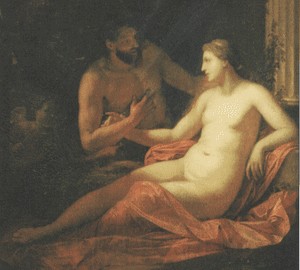 Heracles and Dejanira – Adrian van der Verff. 1699. Wood, butter. 38.5×27.8
Adrian van der Verff (1659-1722), one of the most famous Dutch painters of his time, became famous for canvases on ancient stories. His images permeated with subtle eroticism were of great success among European aristocrats. The artist was invited to Heidelberg, to the court of Johann Wilhelm, the Elector of Pfalz, where he received recognition and lived until the death of this sovereign.

The love story of Herakl and Dejanira, borrowed from ancient Greek mythology, was very popular in classical art of the XVII-XVIII centuries. The brave beauty Dejanir Herakl married at the request of her dead brother, the Etilian hero Meleagra, whom he met in Aida. Once, hearing that his beloved was going to marry another, and wishing to recall the feat accomplished for her, Dejanira soaked a chiton with the blood of a centaur killed by Herakl who defended her, and sent it to her husband. But the blood into which the bile of the Lerney hydra hit the hero’s arrow became poison and caused the painful death of Heracles. Upon learning that she had destroyed her husband, Dejanira committed suicide. This tragic story was well known to educated people of the XVII-XVIII centuries, it became the image of “ideal” love.

In the picture of Adrian van der Verff, the ancient plot is just an occasion for the image of a beautiful couple: a courageous, harsh Heracles and a beautiful, gentle Dejanira. The artist focuses his attention on the female figure, which is highlighted with bright light and shaded with red silk of the blanket.