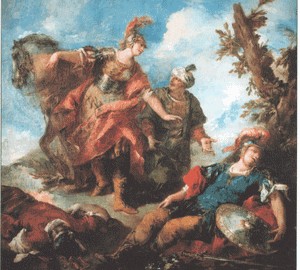 Herminia and Wafrin find the wounded Tancred – Giovanni Antonio Guardi. 1750-1755. Oil on canvas. 260×261
The Torquato Tasso poem “Free Jerusalem” about the First Crusade and its heroic participants has become a source of stories and so many paintings of European painting. So, for example, in the XVII century, the same plot from the 19th song was used by Nikola Poussin. In 1745, she was illustrated by the engravings of Piazetta.

Giovanni Guardi (1699-1760) wrote his cycle precisely on these graphic compositions. Initially, his works adorned Villa d’Este, and subsequently diverged to various museums and private collections. The canvas depicts the moment when Princess Antioch and Erminia finds the beloved hero of Tancred, whose captive she was, wounded after his deadly battle with the warrior of Sultan Argant, whose corpse is placed in the foreground. A loyal squire of a beloved, Waffin, Muslim clothes reminds the audience of his dangerous reconnaissance outing into the camp of the enemy.

The drama of the situation, emphasized by the agility of the celestial sphere, the run of clouds, a fluttering cloak, intersecting diagonals in the construction of the composition is somewhat tucked away by the apparent theatricality of what is happening, the ballet posture of the burning princess.