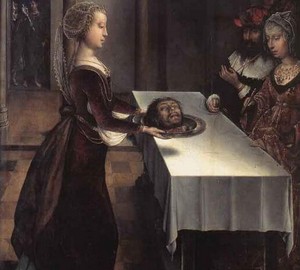 The most obvious and undeniable in the life of the Spanish artist Juan Flandes is his legacy, which is an excellent example of the Spanish-Flemish painting of the Renaissance. Nothing can be said about the rest, and these are the years of life, and fate, and the creative milestones of the painter, is too little evidence left. But there were few of his works …

One of them, “Herodias. Revenge ”, written in a famous biblical plot. Before us are three heroes: Salome, her mother Herodias and father Herod Boet. In the hands of the girl is a terrible trophy – the severed head of John the Baptist. On Herod’s face we see horror, he even slightly retreats into the depths of the picture, trying to involuntarily move away from what he saw. However, Herodias, on the contrary, is not afraid of the head. In the hands of her sharp knife, which she is ready to stick into the tongue of the martyr. The thing is that John condemned Salomei’s mother for her profligacy – she had a love affair with her husband’s brother.

The influence of Renaissance aesthetics is clearly felt in the picture – these are typical scenery, exaggerated lighting over the table, which exacerbates the tense mysterious atmosphere, expressiveness, outlined forms and well-read monumentality. The presented panel is part of the altar of the Cartezian Monastery near Burgos.