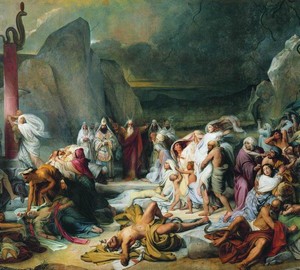 Fedor Antonovich Bruni is an outstanding master of historical painting of the first half of the 19th century. The multi-figure compositions he created earned the fame and recognition of contemporaries.

Work on the painting “Honey Zmiy” was carried out by the artist for fifteen years, and this is explained not only by the huge size of the canvas, but also by the difficulty of understanding and writing a philosophical-based Old Testament plot. The Jewish people, saved from Egyptian captivity under the leadership of Moses wandered in the waterless desert for forty long years. Tired people, tormented by thirst and hunger, murmured, and the Lord sent a punishment on them – rain from poisonous snakes. Then people repented and began to pray for mercy, on which the Lord commanded Moses to erect a colossus and put a snake on it. Anyone who looks at him with the truth of faith in salvation through the Lord will be pardoned.

The artist set himself the difficult task of depicting a diverse reaction of the diverse crowd, showing the degree of faith and humility to the divine will of each person. But the people represented on the canvas are more likely to be in fear than filled with deep humility to the dictates of Heaven.

The artist’s attempt to present the action in nightlight, grabbing figure compositions with moonlight, gives the sound of a picture of a note of symbolism and makes a mystical impression.