“Ice Edge”, Hendrik Averkamp – a description of the picture 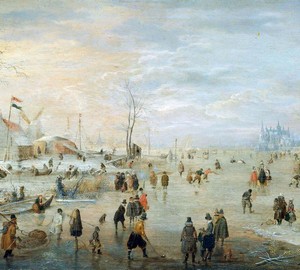 The works of the Dutch artist Hendrik Averkamp are very peculiar, original and entertaining. The dumb of Kampen was called by his contemporaries, but despite the fact that he was deaf and dumb, his work is bright and eloquent.

In 1620, he painted the painting “Ice Land”, which in the plot is almost no different from previous works. Winter landscapes, fun on ice – the artist’s favorite theme, which he carried since childhood when walking, playing and skating with his peers and parents.

It was during the artist’s childhood (the last 25 years of the 16th century) that the coldest winters were recorded. All of Holland turned into a continuous ice rink, which ordinary citizens only rejoiced and used as best they could.

Here in the picture of Averkamp, ice is not at all a hindrance, but only brings additional revival to the life of people.

They continue to do their daily business – here women on the left side of the picture wash their underwear in the ice hole or clean fish, but artisans are in a hurry to do their own thing. In the foreground, a group of men stopped and watched the play of a young man with a club. On the right is a funny scene – a woman full, wrapped in clothes chasing a little dog. And further, to the horizon, people glide over the ice, communicate, get acquainted, play, ride on carts and sledges.

On the right and left, the mowed river is framed by houses, boats, and in the very depths of the picture, a fabulous castle looks through the frosty air, introducing an additional sense of mystery and mystery that is inherent in childhood into the overall mood of the picture.

Thanks to the talent of Hendrik Averkamp, we can now imagine that Holland in winter, modest, silver, white-gray colors, but very real, picturesque and cheerful.

The artist’s works were in great demand among contemporaries. After all, he painted for them small formats convenient for every citizen of Kampen to be able to hang her in his living room and remember a glorious and fun time.