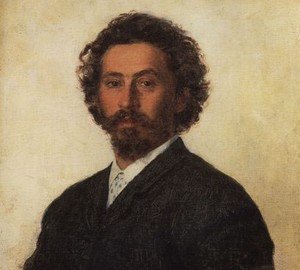 Ilya Repin was born in Chuguev, located on the territory of the Kharkov province, in 1844. And no one then in his head he could not come, that this ordinary boy from a poor family will become a great Russian artist. The mother first noticed his talent at a time when he was helping her, preparing for Easter, paint eggs. No matter how happy the mother of such talent, its development of the money she had.

Ilya began to attend lessons in the local school, where he studied topography, after the closure which is received by the icon-painter N. Bunakovo in his workshop. In the workshop having the necessary skills in drawing, fifteen-year-old Repin became a frequent participant in the painting of numerous churches in the villages. It lasted four years, after which accumulated a hundred rubles, the future artist went to St. Petersburg, where he intended to enter the Academy of fine arts.

Failing the entrance exams, he became a student of the preparatory art school of the society for the encouragement of arts. Among his first teachers at the school were I. N. Kramskoy, who had been a loyal mentor Repin. The following year, Ilya Efimovich accepted to the Academy, where he began to write the academic work, and along with several works written at his own request.

Grown-up Repin Academy graduated in 1871, already accomplished in all respects by the artist. His graduation work, for which he received a Gold medal, was the painting, called the artist “the Resurrection of Jairus’s daughter.” This work was recognized as the best for all the time that there was Academy of art. Even as a young man, then he has to pay attention to the portraits, wrote in 1869, portrait of a young V. A. Shevtsova, which three years later became his wife.

But the widely known great painter was in 1871, after writing a group portrait of the “Slavic composers.” Among the 22 depicted in the painting of the figures depicted composers from Russia, Poland and the Czech Republic. In 1873, while traveling in Paris the artist met with the French art of impressionism, which did not come into raptures. Three years later, returning again to Russia, he immediately sent to his native Chuguyev, and in the fall of 1877 already becoming a resident of Moscow.

At this time he met the family of Mamontovs, spending time talking with other young talents in their workshop. Then work began on the famous painting “the Cossacks”, completed in 1891. Works that are today quite well known, were written many, among them numerous portraits of prominent personalities: chemist Mendeleyev, M. I. Glinka, the daughter of his friend Tretyakov, A. P. Botkina and many others. There is a lot of work and with the image of ln. Tolstoy.

1887 was the year of the Repin a turning point. He divorced his wife, accusing the bureaucracy, left the ranks of the Partnership involved in the organization of traveling exhibitions of artists, also significantly deteriorated health of the artist.

From 1894 to 1907 held the position of head of workshop at the art Academy, and in 1901 receives a large order from the government. Attending multiple Board meetings, in a couple of years, he is the finished painting “the State Council”. This work, with a total area of 35 square meters, was the last of the great works.

Repin married a second time in 1899, by companion N. B. Nordman-Severova with which they moved to the village of Kuokkala and lived there for three decades. In 1918 because of the war with the white Finns, he lost the opportunity to visit Russia, but in 1926 the government receives the invitation, rejected for health reasons. In September 1930, the number of 29, artist Ilya Repin did not.