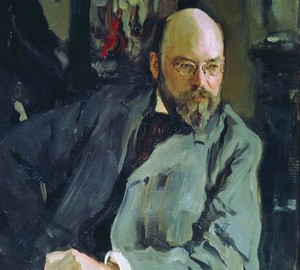 Ostroukhov Ilya Semenovich – Russian landscape painter and collector, friend of the Creator of the famous Moscow gallery Pavel Tretyakov. During his life he held numerous positions, was an academician of the Academy of arts in St. Petersburg, one of the people who led the Tretyakov gallery, a member of the Union of Russian artists and a member of the Association of traveling exhibitions.

The future painter was born in 1858 into a wealthy merchant family. At the age of 12 he entered the Moscow practical Academy of commercial Sciences in the future to continue the family business. During his studies he became interested in wildlife. The passion was very serious, as a future artist in 7 years, even wrote a book about angling, and also corresponded with the very Braine. Over the years Ilya has collected so decent, and the bulk collection of insects that she was later transferred to Moscow University.

The desire to draw in the young man awakened familiarity with the well-known family of merchants and patrons of Mammoth. He was friends with the sons of the publisher Anatoly Mamontov and communicate with their teacher Kiselev. Of interest to the landscape provoked paintings Polenov, Ilya seen at the exhibition of the Wanderers. Subsequently, the Ostroukhov I studied and took lessons from his namesake – Ilya Repin.

The period of study of the artist and his early career was in the fertile time. Among his teachers and friends included such titans of Russian painting, as Vasnetsov, Serov and Makovsky, Chistyakov and many others. Together with Vasnetsov he designed the performances, and Opera productions of the house of the Mamontovs, who had success. But his heart he gave to the landscape.

Wanting to continue his education, and in 1882, Ilya tried to enter the St. Petersburg Academy of arts, but first spent a year as a volunteer. At the same time he continued to study and take private lessons from famous teachers and artists.

Two years later he began exhibiting his works at exhibitions. In 1887, two of his works were purchased for the Tretyakov gallery. At the same time, the artist went to Europe, called for Austria, Germany and France, and then Italy along with his friend Serov and brothers Mamontovyh. One of the paintings, written during the trip, participated in 27 traveling exhibition and was also purchased for the Tretyakov gallery.

During these years the landscape became known as a collector. In 1898 Tretyakov died, and there was a need in the organization of work of the gallery. Was offered a list of people who had to go to the organization’s leadership. Ostroukhov was a member of the Board of Trustees. Then many years during some of the periods he plays the role the actual head of the Council.

His activity aroused the envy and the desire to remove the artist from the post. In 1903, Ostroukhova was accused of too high spending on the procurement of works. After discharge from the post master went on vacation to Europe to a sanatorium in the French Vosges mountains. In 1905 he was able to regain the position. But after eight years of crazy messed up Repin’s painting “Ivan the terrible and his son Ivan”, after which the collector was hounded to such an extent that he resigned from the post.

The landscape had a vast collection of paintings, icons and a large library. After the victory of the Revolution in 1918 the Museum was nationalized, and the former owner made it a Keeper for life. Painter at that time already was a very sick, broken person with low vision, which was crippled by the catastrophic changes in life. He died in 1929. Just a month after the death of the owner of the Museum was destroyed, the exhibits were dismantled in the museums. Not spared and the elderly widow of the artist. Deprived of her home and the old lady lived in the basement.