“In the blue expanse”, Arkady Alexandrovich Rylov – overview of the painting 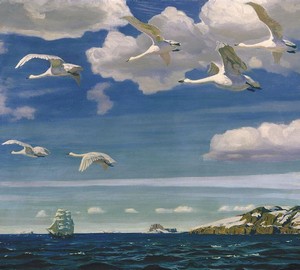 Since this life-affirming canvas is written at the dawn of the birth of the USSR, critics reacted to it in a special favor, seeing in it a symbol of a new path. Of course, this subjective perception of the connection of the spring flight of beautiful birds and the approval of the new government is somewhat attracted. But, anyway, with the light hand of art critic A.AND. Fedorova-Davydova began to call the picture a work from which “it is customary to begin the history of the Soviet era.”.

What is actually depicted by the artist? Of course, there is not a single political image in the picture: it depicts how a flock of swans flies against the background of a layered white and blue sky and cumulus clouds, rising above the dark sea waves.

In the background, snow-capped rocks of an uninhabited island rise, and a small sailboat is also visible. Around not a soul, only the endless ripple of waves. The picture is permeated with infinitely bright light and a feeling of fresh sea air.

The image of birds was a familiar plot for Arkady Alexandrovich, who passionately loved nature and looked out for animals. The canvas “In the blue expanse” is often compared with his works “Lans over Kama” and “Culls”, where snow-white birds are also shown against the background of blinding sunlight and endless waves.

The painting is exhibited in the Tretyakov Gallery, and in 1972 was awarded the issue in the memorial philatelic block.