“In the German Sloboda”, Alexander Nikolaevich Benoit – overview of the painting 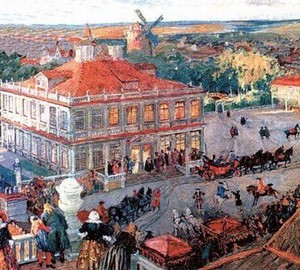 Creatively very versatile, Alexander Nikolaevich Benoit as an artist is especially interested in his historical paintings. Basically, he writes paintings on two historical topics – “France, Versailles from the time of King Louis XIV” and “Russia, St. Petersburg, Moscow”. At the beginning of the 20th century, Alexander Benoit was very fond of such painting, and his works were often published in the journal “World of Art”.

The second topic is precisely the work performed by gouache on paper “In the German Sloboda. Departure of King Peter I from the house of Lefort. ”. In the picture, the viewer is presented with a panorama of Moscow such as it was three hundred years ago under Peter I. Now this area is called Lefortovo. And before they called this place near Moscow, on the right bank of the Yauza – German Sloboda.

A magnificent view of the town opens, presented by the artist from a high point from which a mill, church and the plain, forest, river, clouds that go into the distance are visible. The central place is reserved, of course, for Lefort’s house – a bright, lit by lights, rich, with magnificent architecture, light and air, giving additional festiveness to the whole event. And this is really an event – because in the settlement, the sovereign Peter the Great himself!

Although, then still very young Peter I came to German friends to learn European sciences from them, he conducts shows and exercises, tests guns, makes fireworks himself and is engaged in carpentry. But the sovereign also rests in a kingly, on a grand scale, with “drinking and amusement.”. And in the morning again things are!

In the picture, Alexander Benoit just captured the king’s departure from the German settlement in the early morning. He leaves Lefort’s house with numerous associates, courtiers, servants and a robe. This causes great interest of all residents of the settlement. The people poured out onto the streets in order to see for themselves the wonderful Russian king.

In this work, it is felt that the author knows the topic, knows the story, and he perfectly transfers it to us through his own perception.