“In the Turkish deceased”, Vereshchagin – overview of the painting 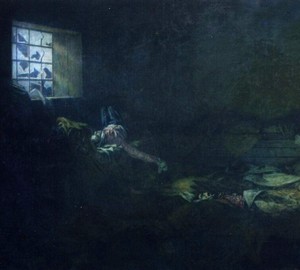 When mentioning the cycle of artwork by Vasily Vasilievich Vereshchagin, known as the Balkan series, one of the first in memory of the painting “In the Turkish deceased”, evoking the most sincere, mournful feelings.

Polotno “In the Turkish deceased. Pokoinitskaya Turkish infirmary in the campaign of 1877-1878.”written by the artist in 1881, a little later than most of the paintings of the Balkan series. This cycle was incredibly hard for Vereshchagin. The events that took place during the Russian-Turkish war did not let go of an artist who got rid of pain, indignation and internal protest, transferring the real face of the war to the canvas – cold, dead and terrible in its inevitability.

The picture depicts the late hospital located in Plevna during bloody battles with the Turks fighting under the leadership of Osman Pasha. A sad and bitter sight appears before the audience. In a dark, dirty room, the wounded man rushing in a fever next to slowly dying and long-dead soldiers. The place is not enough, as well as decent medical care, so the unfortunate are not only on the Poles: straw on the floor was also the last lie for soldiers. The spirit of death and hopelessness is hovering over bodies that are casually hidden by soldier blankets wiped on long hikes.

The artist masterfully used his subtle natural sense of color and knowledge of the laws of luminosity. The canvas almost tangible conveys the density and stench of hospital air, thanks to an abundance of heavy, dark shades of blue, and the weak rays of sunlight penetrating through the broken window of the deceased only increase the painful impression. The open picture of Vereshchagin “In the Turkish deceased” is a kind of illustration of the true result of the war, its exiles and tragic outcome.