“In the workshop of the artist”, Vasily Vladimirovich Pukirev – overview of the painting 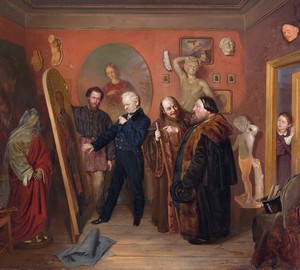 In the workshop of the artist – Vasily Vladimirovich Pukirev. Oil on canvas. 59 x 73
The picture is autobiographical and at the same time caricature: the painter depicted a scene typical of his time and even included a self-portrait in it, but the images of the other characters are hyperbolized and ridiculous.

The action takes place in the studio of the artist. Pukirev, obviously, portrayed himself: the same image can be seen in his other picture “Unequal Marriage”. Judging by the type of workshop, its owner is extremely talented and versatile: there are numerous sculptures and paintings with both secular and religious subjects.

The artist shows the icon to a potential buyer – a middle-aged man in a black suit. According to art historians, the prototype of the character was the landowner and philanthropist P. AND. Gubonin. His face is incredibly serious and focused, and there is a certain comic in this – it is unlikely that the buyer can fully understand the skill of the painter.

Behind the buyer are a priest and, apparently, an expert on art who could help appreciate the icon. The image of the spiritual face is mocking – it does not even look at the picture – and the connoisseur, on the contrary, is somewhat distracted. A maid is watching the scene, looking shyly because of the door open. In contrast to buyers, the artist himself looks serious and even strict, while there is no comic in him.