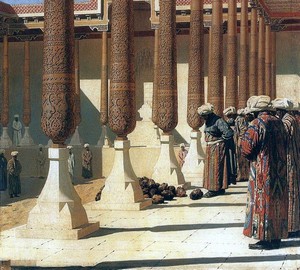 At first glance, this picture may seem like an ordinary genre scene depicting the peaceful life of some exotic palace. But, recalling the belonging of the canvas to the “Varvary” series and closely looking closely, many spectators will involuntarily stagger – round objects dumped into a heap are not at all ordinary gifts of nature. These are severed heads of enemies captured by the winners as trophies.

The tradition of chopping off heads, hands and other parts of the body has survived to this day from ancient times, and among civilized peoples has ceased to practice for a very long time. But the master’s picture refutes the view that modern war has a different nature. Nothing like this, the same barbarians lead her, as centuries ago.

The theme of the canvas contrasts with its light gentle color and elegant oriental architecture. It is full of the blinding Central Asian sun, bright colors, but behind all this beauty lies the gloomy shadow of death – cruel and cold, meaningless and greedy.

The heads were brought to the palace in Samarkand, owned by the emir. They are proof of the valor of his warriors, a wild way to demonstrate their effectiveness in the war. This monstrous, grotesque in its incredible cruelty and disrespect for the death of a human being takes place in a beautiful place. The inner gallery of the palace with a carved colonnade on elegant grounds contrasts sharply with the repulsive essence of what is happening. In the depths of the picture is depicted the legendary throne of Tamerlan – a symbol of the divine power of the local emir.

The “deity” itself looks with unhealthy interest at its military trophies, while its retinue holds on at a distance and carefully covers its noses with the wide sleeves of its colorful eastern bathrobes. In the roast of the Central Asian sun, the flesh decomposes instantly, and the smell should be simply deadly. Here it is, the real spirit of war is the smell of death.