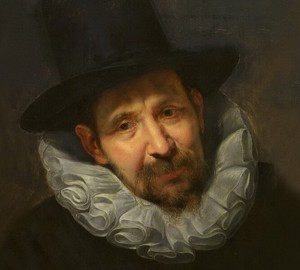 From the dynasty of Flemish painters Brueghel, perhaps Jan Brueghel the Elder was the most worthy successor of the names – the number of works, of success, unmatched in the performance of flower still-lifes, in friendship with the influential and creative people, on the continuation of the dynasty of painters.

Jan Brueghel – the second son of the famous Dutch painter Pieter Brueghel the Elder, was born in 1568 in Brussels. Parents he lost before. The father died when the boy was only 1 year, and when was 10 years old, his mother died. Ian took to himself in Antwerp and was raised by his grandmother in the maternal line, which, incidentally, was also a painter, who painted miniatures with floral landscapes.

Ian favored the creative environment in which he fell, and the boy enthusiastically understands the science of painting. He was lucky to be taught by the Dutch painter Gillis van koninksloo and famous master Peter Goedendag.

At the age of 21 years, Jan went to Italy, then visited Germany, France, meets and absorbs the painting of national schools, and then for 5 years to settle in Rome. He’s got friends, the artists Paul Bril and the young Rubens, friendship which will be common works, for example, the painting “Paradise” (1620) and others.

Momentous in the fate of Jan Brueghel was a familiarity in 1593 with Federico Borromeo, Archbishop, patron of the arts, appreciated the talent of the young Bruegel, who took on him the patronage and with whom the artist will retain friendly relations until the end of his life.

And the ability Ian had already attracted the attention of the public. The young man immediately abandoned the imitation of his father Pieter Bruegel the Elder, unlike his brother Pieter Brueghel the Younger. The young artist has their own preferences in the stories and the style. In this period he writes on religious themes, and included in that time in the fashion of the folk (“plebeian”) motives, and beloved flower paintings.

Back in 1597 in Antwerp, Jan Brueghel the Elder enters the era of its heyday. It is taken in the honorary Guild of artists the name of St. Luke. In 1601 and 1602 years – is the Dean of this society.

He becomes famous and popular painter. It is called “flower” because of the vast number of paintings with flowers. Moreover, the author pays great attention to the small and smallest details, achieving complete naturalness, drawing flowers from nature, sometimes even waiting for the bloom.

Also appears frequently and the prefix to the name Brueghel “velvet”. Due to the special, it is inherent in the execution of their work. Landscapes, people, houses, flowers – all beautifully, like a shimmering velvet with a soft and warm color, with the “luxury kindness”.

In 1599 he married and his first son later will continue the dynasty of artists as Jan Brueghel the Younger, and grandchildren Abraham and Yang also will become the masters of painting.

In 1604 he visited Prague at the invitation of the Bohemian king Rudolph II. From 1606 he was court painter to the Brussels court, the President of different societies, a successful businessman, he has many Royal orders from influential people and ordinary citizens.

He is famous not only for landscapes but also works on mythological themes and allegories of fire, sight, and smell, taste, hearing. Artist is subject to all genres. Great it works with typical rural landscapes and scenes, fish markets, leisure ordinary families, pictures of the city, the house and the mill, the Flemish fair.

Unfortunately, the epidemic of cholera that prevailed in Europe in January 1625, claimed the life of talented and successful painter, and his three youngest children. But it’s a nice, juicy, tender paintings please people in our time.