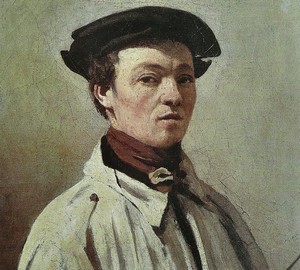 The most different, most unique, most original critic never skimp on enthusiastic epithets against the French romance, which expanded the boundaries of the genre and made it something that was the inspiration for the Impressionists of the second half of the XIX century.

Corot was an artist “suddenly”. Since childhood, this absent-minded and taciturn son of a wealthy merchant parents special problems does not deliver. He studied at a private boarding school, then was sent to Rouen, where he learned the basics of the trading business. Studied without pleasure, but was good in all subjects.

Already first experience in the store dealer cloth was sad. Camille did not know how to sell the stale goods, and new and quality product gave a great discount to anyone who the discount he asked for. The shopkeeper sent his family a letter in which you announce with deep regret to the parent that his son was unfit for Commerce. Dad thought to be upset, blaming all the failures of the offspring in youth and inexperience.

Camille’s sudden statement that he no longer wants to do business and wants to become an artist, also drove the father out of the rut. He was just glad that to spend more money on his son, he will not.

Several years in apprenticeship at the famous masters of painting of Paris and has taught little budding artist. A lot more he learned during a trip to Italy. From a trip Coro brings several sketches, which received a good feedback from colleagues. After Italy, the artist travels to his native country, creating one masterpiece after another. His fertility and the rate at which the master gave all the new paintings, the artist was reminiscent of the Dutch masters of the XVII century.

The legacy of the Corot is a gallery of portraits, several works on mythological and allegorical subjects, and innumerable landscapes, which received the highest recognition in the art world.

The master believed that only what is written from nature the first time is the most sincere and talented. Atudent of his paintings, some unfinished, at first puzzling, but soon the criticism has put up with it. Along with the incompleteness, in the works of Corot was fascinated by the ability to “grab” the main thing is to avoid the static and bring to the landscape something more. Playing on the tones, love the mist, the haze, indistinct forms, the artist managed to make their romantic landscapes that feeling of freedom and life itself, inspired the Impressionists, it concerned a transfer of the movement of the surrounding world, first impressions.

Corot was faithful to his style until the end of his life. From 1827 until his death in 1875, the wizard does not pass any exhibition in the Salon. I wonder what his latest work was presented to the public after his death. Dying in his Paris apartment, Corot ordered several of his works to exhibit at the next show, even if it will no longer be alive. At the exhibition of 1875, the most popular with the public were the work of a deceased artist and recognized master, unique and original, unlike any other.