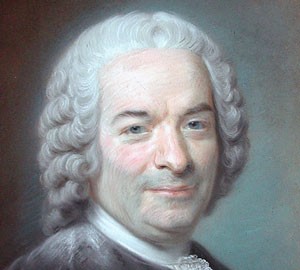 The contribution of this artist to the Treasury of world art are still not appreciated. After centuries of oblivion after death, his work was recognized as the greatest achievement of realism. His still lifes and genre paintings decorate expositions of the greatest museums in the world. His technique and writing style taught in art academies around the world. More than anything he loved to paint fruit…

About the childhood and youth Chardin is known very little. All his biography starting from the moment when the master had turned 30 years old. It is known that he was born in the family of a cabinetmaker. Where Chardin was received his artistic education is unknown, most likely, his school is the workshop of Noel Kapela, where the master worked as an assistant. It is known also that throughout his life, Chardin does not leave Paris.

Working in the workshop of acclaimed master, the young Chardin ran errands related to the accessories picture and details of the paintings of the owner. Extraordinary thoroughness and accuracy in work, responsible attitude – all these qualities have led to the fact that more and more details pictures of Capela looked better than all the work as a whole. Master Chardin, knowing that the apprentice has become a master offers to his employee to pay some of his work at the exhibition “beginners”, which took place in Paris in the place Dauphine.

The exhibition of Chardin’s work was seen. The impression was so strong that many were sure – before them the Dutch masters of the XVII century. One of the honorary members of the Academy made an offer to the novice master to exhibit their work in the walls of the most prestigious exhibition halls of France. A few years later, the handyman, the journeyman, assistant Chardin became a member of the French Academy, written with the wording “izobrazitel of fruit and domestic scenes”.

All his life the artist painted the life of the “third estate”. In defiance of all fashion, which ordered the commitment of the gallant style, empty, but fine art designed to decorate and enliven the interior, the master has doomed himself to eternal uniqueness and separateness. He received orders for still lifes in the style of Dutch Baroque. His genre work was appreciated by only the most perspicacious contemporaries (his paintings admired by Diderot and the French Encyclopaedists raved about his work in their publications). Compatriots have forgotten the master immediately after his death. Then there was a revolution, a surge of romanticism, then lush Empire froze the work of the realists of the eighteenth century.

Only in the second half of the XIX century, when the development of painting came close to the realism, creativity, Chardin became a model and reference for masters of Western culture. The wizard and today admired not only art connoisseurs, but also the most unsophisticated viewers.