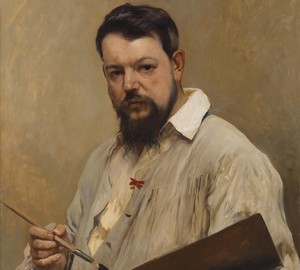 Spanish painter Joaquin Sorolla was born on 27 February 1863 in Valencia. He was a talented and gifted artist – impressionist. His whole life flashed like a bright firework, creative, love to unknown heights of the Universe and the desire for goodness and light. In nature the earth he drew inspiration painting living pictures full of natural colors, bright and enriched reality in Sunny colours.

Joaquin was born in the family of a merchant, and was named after him. The boy became an orphan at an early age when the child’s parents died of cholera. He was with his sister in the care of aunts and uncles. The husband of my mother’s sister was a mechanic. He tried to teach young Joaquin locksmith craft. But the boy was not interested in this specialty. All his powers were given to the painting. Joaquin’s childhood was difficult. He knew a lot of difficulties, hardship and adversity. In spite of everything, the boy was strong in spirit and bravely endured all the trials of life.

The young artist loved the world, nature, people, animals, the village. His soul was thin, sensitive, vulnerable. All his impressions and experiences he carried in his heart and expressed in the artwork. Joaquin graduated from the school of fine arts in his native Valencia. Uncle helped him financially until he could. When the relative difficulties in monetary terms, Joaquin tried to make a living. He painted pictures for sale, to pay the tuition. He then studied at the school of crafts, and attended evening classes. For excellent studies at graduation, he received from the teachers a gift – a set of paints. It was a great joy for him!!!

For fourteen years the young man studied painting with the artist and Director of the national Museum of European art, the Prado in Spain. At eighteen he went to Madrid. There fate brought him with other artists. He studied with interest the works of masters painting in the Prado Museum. These masterpieces of his captivated and inspired!

At 22, he was very lucky! After serving military service, Sorolla received a grant from the Spanish Academy, which allowed him to have a course on painting in Rome. Joaquin loved to travel. He visited Paris, became acquainted with the life of the French and German artists. Their work, he worshipped! Their original art works H. Sorolla exhibited in the famous Paris salon. They evoked the admiration of the public. For their masterpieces, the artist was awarded gold medals and Grand Prix.

Joaquin Sorolla gained popularity not only in Europe but also in America! The fame of the artist spread around the globe. He organized personal exhibitions in Paris, Berlin, Dusseldorf, London, new York, Chicago and other cities. In Paris, solo exhibition, they were provided with 500 different works of art. His creative activity was highly appreciated by the society. For such great work and contribution to art, he received the award of Chevalier of the Legion of honor. In 56 years Sorolla was a famous Professor at the Royal Academy of fine arts of the Spanish city of San Fernando. For many of his works he received the award.

Joaquin was married. The marriage had three children. The couple has two grown daughters, Maria Elena and son Joaquin is named after him. The artist loved to paint his family, his wife Clotilde and children. Especially amazing was the scenes on the beach. Here he used bright colors, range midtones and the shadows. Drawing strokes complement the General background of the picture originality. With great pleasure he painted portraits of relatives, children, neighbors, fishermen, and even the President of the United States of America last time. He just excelled in scenes of village life, in them he found a special uniqueness.

Painting was his guiding star, attracted by its beauty, fascinated by charm, fascinated in the space provided of the Universe. The master had extraordinary creative energy and loved the whole world, finding in every man a secret wonder of earthly harmony. It helped him a lot in life, as he saw people as friends and associates.

In 1920, the artist had a stroke. Treacherous, dangerous disease found him at his easel in the garden of his house. Sorolla became seriously ill and during the summer of 1923 passed away. His work received great public recognition and are in many countries of the world.