“Job and his friends,” Ilya Repin, “overview of the painting 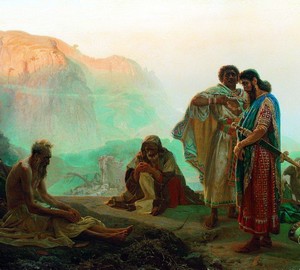 In 1869, Repin received a small gold medal for the painting “Iov and his friends” – the commission admired such an original (but within the framework of academic requirements) embodiment of the famous Old Testament plot.

Martyr Job appears before friends who have been buried by what they saw – once a happy righteous man, having lost children and all his property, suffers from terrible diseases. Close people are amazed at so many dramatic changes in an unhappy friend.

At first glance, the color palette attracts attention. The background is represented by a haze texture made in emerald color. Through the haze are mighty mountains, the peaks of which are illuminated by the sun. The heroes of the picture are depicted in contrasting colors, simultaneously perfectly in harmony with each other.

But the most striking is the filigree embodiment of emotions. Job’s tired and detached face, heartbroken, suffering the face of his wife, located to the right of his unfortunate husband, the amazed-worn faces of friends.

There are no tears, moaning, desperate screams, however, you almost physically feel a difficult situation, extreme loneliness, fear, a unfolding plot.

Many critics honestly noted that the young Repin surpassed many recognized masters of the portrait and historical genres in this work. And it was just beginning …