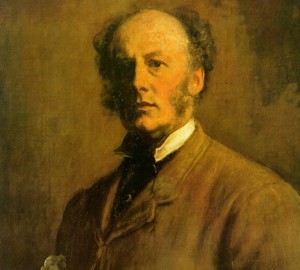 Possible without the work of this English artist, the world community would not know about the existence of such direction in painting, as the pre-Raphaelite Brotherhood. Millais became one of the founders of this society, showing the world this beautiful and inspiring painting.

To the pre-Raphaelites can be treated in different ways, and to love and to hate, but to be indifferent is simply impossible.
Birthplace of painter in 1829 in Southampton. His talent emerged early, and a boy at the age of 9 years old began to study painting. When the parents realized the undeniable artistic talent of the child, they moved to London so young John could continue his training from the best masters of that time. It happened in 1838.

Two years later, the boy entered the Royal Academy of arts. As he at the time was only 11 years old, he became the youngest listener for all the work of the educational institution.

Training time took 6 years, but long before graduation, John has demonstrated his talents and abilities. 2 years after entering the Academy, he received a silver medal for drawing, and another 4 by his picture of “Pizarro take prisoner Inca Peruvian” it is the best for the summer exhibition at the Academy. The following year, his painting “Attack of the tribe of Benjamin at the daughters of Siloam” is awarded a gold medal.

1848 is significant for the millet, and for world art. He met Dante Gabriel Rossetti and Holman hunt. Thus was created the pre-Raphaelite Brotherhood, which became one of the most controversial movements in art of the XIX century.

The paintings differed from his work colleagues of excessive detail and were more realistic image. However, among his works there are paintings that can be considered the anthem of the pre-Raphaelites. One of them, for example, includes the famous “Ophelia”, which depicts the body of the drowned girl floating in the amazingly beautiful backwaters with floating flowers and white-blossomed wild rose – a symbol of innocence.

Although Millais paintings in this style were accepted to the exhibition, a new direction in painting took root with difficulty and is often perceived in bayonets. When Millais married, he had to think about how to contain himself, his wife and the appeared one after the other eight children. His painting he put on a conveyor and abandoned the use of equipment and pre-Raphaelite style. Oddly enough, it almost immediately brought considerable dividends. Crisp, graphic style mill with careful attention to detail meets the rich taste of the audience of those years, and he made a very good living. His income reached 30,000 pounds per year, which was at that time a huge amount.

Except for the rich, art painter and portraitist brought master recognition in the form of the title of baronet, which he received the first of all artists in the UK. This happened in 1885, and the following year he became President of the Royal Academy of arts.

The master died in 1896 at the age of 67 years. To the present day he remains one of the most esteemed English artists, and his paintings are frequently copied and replicated in commercial images.