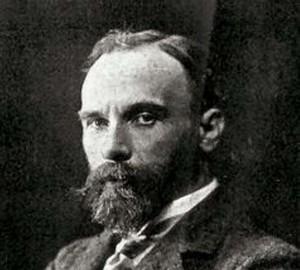 English painter John William Waterhouse was born on 6 April 1849, Rome. He illuminated the world with the torch of his inspiration, creating a unique fabric. A brilliant master of the brush left from reality, expressing creativity in the depiction of biblical and mythological subjects. The main character of his paintings – strong, freedom-loving, beautiful women in the images of divine creatures. Mysterious and alluring Ophelia, Psyche, Penelope, Minerva, Cleopatra – the sorceress of his dreams and dreams! All his life he devoted to art, putting in their work a huge amount of energy, an enormous capacity for work, willpower and patience.

John grew up in a family of artists. His parents were intelligent and educated people. They worked hard, devoting his time to work. Parents have organized house meetings, inviting their friends. Since childhood, John was witnessing the Bohemian life of artists and poets. This creative atmosphere had a great influence on the formation of character of the boy, the development of his aesthetic taste and love to the world. He was interested in many Sciences, loved to read, draw, walk in nature, enjoying its magnificent beauty. He liked fairy tales, myths, legends, in which he was immersed as a whole, each time discovering new and unknown. In the myths of the future artist found a amazing images and presented them drawn on paper. The painting “came to life” in his imagination!

A few years after John was born the family moved to London. They settled near the Museum of Queen Victoria and Prince albert. A delightful place of residence, attracted by the beauty of urban buildings and harmony of nature. John Waterhouse lived here until the end of his life. The boy worked in his father’s workshop, doing sketches, and sketches from galleries and Museum exhibits. He was fascinated with art! The father gladly gave his son painting classes. Young John decided to become an artist.

At 21, the young man enrolled in the Royal Academy of Arts. Admission to this school was for him a great joy! The study of sculpture was a great pleasure. His paintings have captured the magic of colors! He was an excellent student and successful, shining with knowledge and talent. His interest and love of art was the spiritual impetus of the inner world. The best works of the young artist received a well-deserved recognition and were highly appreciated by the teachers. School and Museum Dudley was held the presentation of his paintings.

John Waterhouse sought to develop their own individual creative style. He was pre-Raphaelite painter. His spiritual kinship with the Italian masters of painting created a special mood. Waterhouse wrote painting, which depicted a graceful, long-haired goddesses from mythological subjects. Women served him a rich imagination and inspiration. He drew them amongst the unusual terrain: wild vegetation, overgrown ponds, lush forests and fabulous gardens. In early works he shone nostalgia at the memorable Italy – ancient ruins, crowded bazaars, quiet courtyards and streets. He often wrote of the virgins in the background of Italian landscapes, coming up with wonderful antique outfits.

John Waterhouse owned his unique skill of using strokes of academism and impressionism. Great attention he paid to broad, abrupt strokes to convey life in motion. The artist used in the works of bright colors and tones with intermediate tones, sharp contours of the images of light and shade, the contrasts of red and black. These artistic techniques were combined with elements of erotica lush, eclectic, intriguing games and amusements, as well as Gothic, historicism and architecture. Waterhouse loved virtuosity, lightness, grace grace. All this the artist brilliantly portrayed against the backdrop of the salon landscapes and biblical scenes. He preferred to paint flowers and nature from nature.

The most famous work of John Waterhouse’s “Lady of Shallot”, created based on Celtic legends. His other famous paintings – “Ophelia” and “Saint Cecilia”. The artist led a quiet, social life, communicating with colleagues at work. He has not been involved in public scandals. The artist idolized women politely chatted with the models, never dealt with them flirting, deeply valued and respected. He wrote many original works and sketches. Waterhouse frequently drew from nature the red-haired beauty Muriel foster. Admiration for her knew no bounds, but this hobby was purely artistic and aesthetic.

In 1883 John Waterhouse married bright and extraordinary artist Esther Kenworthy. Their two children died in infancy, but the tragic loss of yet more binds this Union in which the couple were soul mates and associates. John often painted portraits of his wife and do with her personal sketches. She was his Muse. Drawing her sister Mary, the artist embodied in the canvas the image of Lady Shallot.

In 1885, Waterhouse was recognized as a fellow of the Royal Academy, and in 1895 became its academician. Throughout life he held exhibitions of his works and was engaged in the sale of paintings. The artist has achieved in society, a lot of fame. His success in life was brilliant! The paintings gave him public recognition and financial success.

John Waterhouse suffered from cancer. He died at the age of 67 years in February 1917. In 1992, his iconic image has appeared on British postage stamps. The memory of the artist alive and now! His paintings are bought by collectors for big money. Paintings by John Waterhouse is known around the world. They are stored in museums and private collections in the UK, England, Australia, USA and Russia.