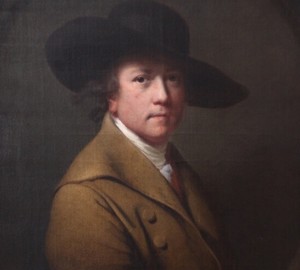 Joseph Wright was born in 1734 in Derby, and died there in 1797. To his name because of this often add the prefix “Derby”. His attachment to his native city was marked by the fact that a significant part of his artistic legacy of paintings is stored in the city Museum and owned by the city Council.

This artist is one of the brightest representatives of English art of the eighteenth century. Critics often call him a master of light and shadow, because he masterfully managed to portray the various effects from light sources, especially from burning candles.

The work of the master was formed under the influence of the art of Caravaggio and his school. It is based on clear contrasts and very deep, almost black shadows. The result of the lit parts and body fragments appear to be particularly voluminous, convex, literally protruding from the plane of the canvas.

Wright is considered to be one of the first artists who started to paint in the industrial theme. He created a series of works depicting how science fought their way out of alchemy. This theme was very popular at the time when produced the most significant and fundamental scientific discoveries.

The artist’s father was a lawyer in the family were five children, Joseph was the third child. In his childhood he studied in a local school and studied painting by copying various works of art. In those days it was common practice.

Having taken a firm decision to pursue a career as a painter, Wright went to London, where for three years studied under Thomas Hudson, who was a teacher of the famous Reynolds. The influence of the teacher on the student was very high, so it is the first work done in style and creative manner, imitating Hudson.

13 years early in his career, the future master held in his native Derby. Here he became acquainted with Josiah Wedgwood, who founded one of the first industrial enterprises for mass production of porcelain and chemist Joseph Priestley. Their experiments were very interested, and he with great interest and pleasure was painted on scientific topics, such as “Planetarium” and “Test pump”.

An artist trying to promote his paintings exhibited in London, but to live always preferred in Derby. In 1773 – 1775, he visited Italy, where he explored and sketched numerous remains of ancient civilization, made copies of ancient statues and painted numerous landscapes. Here he had the opportunity to see the legendary eruption of mount Vesuvius. This sight is so impressed and shocked with the masters that he wrote an entire series of paintings on this theme.

Another important motive, typical of his work of that period is numerous images of caves and grottos. They, like other natural objects, the artist drew the image of light and shadow, so many of the paintings reflect the view from the cave to the world.

Trying to get new clientele, Wright spent two years working in bath. But all was in vain, because in the city were all massively fascinated by the works of Gainsborough.

Since 1778 the position of the artist hardened, and he creates one of his most famous works – a series of portraits. He begins to exhibit at the Academy of arts and became one of its members.

Last years artist was difficult because of his illness. He died in 1797. They buried him in the Church, which has not survived. Currently, his remains are buried in the cemetery of Nottingham road.

Interestingly, most of the revenue Wright received for the implementation of custom portraits, and history is preserved as the author of one of the first paintings industrial painting.