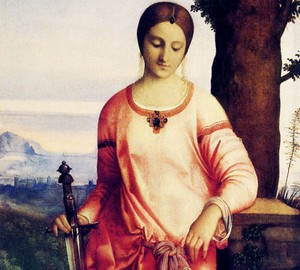 Giorgione, a Venetian by birth, studied with the famous painter Giovanni Bellini. He not only brilliantly learned the depth and warm color of the works of the mentor, but also surpassed him in many ways.

“Judith” – one of Giorgione’s most famous works – depicts a beautiful biblical heroine who saved her city and people by seducing, and then decapitating sleeping Olofern, the leader of the enemy army. Giorgione showed not the feat itself, but the moment when Judith was left alone with the head of an defeated enemy, which she tramples on with her foot. In her image, the pride of the winner and the sadness caused by the perfect act are felt. The figure of the girl and her pose are emphasized feminine, but the right hand firmly compresses the sword.

Researchers suggest that Giorgione gave Olofern his own facial features. Perhaps this explains the fact that, contrary to the established tradition, the head of Olofern does not look monstrous and vile, on the contrary, the face of the defeated warrior is beautiful.