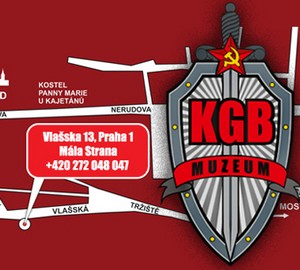 Museums of the Czech Republic never cease to amaze tourists with its diversity. Prague in 2011 has delighted the fans of Soviet history – there was opened the first Museum of the KGB.

It was founded by the non-governmental community “Black rain”, the members of which for many years collected unique items related to the activities of state security agencies. The KGB Museum in Prague – a place where enthusiasts saved from destruction and recycling is truly priceless items that belonged to the leaders of KGB, NKVD, OGPU, and the first persons of the USSR.

In a separate room you can see the photo exhibition Prague sample 1968 – dramatic pictures taken by KGB officers, cameras used to conduct secret filming, the insignia of the agents, displays covering the history of personal weapons officers. Each of the halls of the Museum recreates the atmosphere of the premises and offices of the KGB, here you can see almost everything that was inextricably related to the activities of officers and employees of the Soviet secret police. Some of the materials exposed here, is not yet cleared marked “top secret”.

Not many museums in the world can boast of the exhibits, including the exhibits so unique as the death mask of Vladimir Ilyich Lenin, the weapon that killed Trotsky, the equipment of laboratories of the KGB, personal items Beria and a considerable number of other equally rare items.