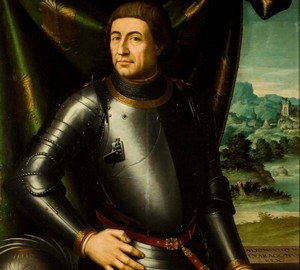 Juan de Juanes (Visente Juan Masip) is not in vain called Spanish Raphael. But he not only imitates the manner of writing a famous painter, but also brings his personality, which brought him recognition in Spain and around the world.

Like the Italian, Juan, in addition to a large number of religious paintings, has many portraits. The most famous is the portrait of “King of Aragon Alfons V”, written in 1557.

The history of the county, and subsequently the kingdom of Aragon, is rooted in the Middle Ages. The path of Aragon from the county to the kingdom and its entry into the Spanish state was difficult. Endless wars required strong, courageous and wise rulers. That was King Alfonso V. Since 1416 he ruled Aragon and received the nickname of the Magnanimous. Historians consider his reign to be the “golden age”, the heyday of culture.

At his court there were always many scientists and creative people – poets, artists, sculptors, he glorified himself as their patron and famous philanthropist.

There is nothing superfluous in the picture of Juan de Juanes, everything is focused on the central figure – the king. From the canvas a man looks at us in the prime of life. Large facial features, smart eyes. His posture in the semi-turn gives the decisiveness and dynamism of the composition.

In the portrait, the artist depicted Alfons V at all attributes – state, royal and military. On it is iron armor, the hand compresses the sword, on the left on the table is a military helmet. All this suggests that Alfonso is a brave commander and warrior. Near the crown is a sign of belonging to the monarchical power. There is almost no landscape background. Only behind the back, behind the opened receptionist, are the lands, forests and castles of Aragon visible. The very kingdom, for the liberation and flowering of which Alfonso V fought almost all his life and died in 1458 during the military siege of the city of Genoa.