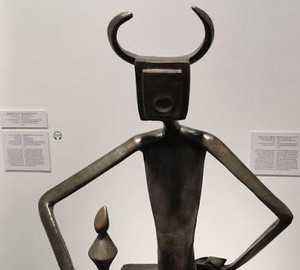 The king playing with the queen is Max Ernst. Sculptural composition, bronze. 1954

Max Ernst is one of the most interesting artists of the 20th century with original and peculiar thinking. His work is very specific and fraught with a certain mystery. Of particular interest is his sculptural composition “The King Playing with the Queen.”.

This work continues the chess theme raised by the master at this time. Before the sculpture by Ernst, several sets of avant-garde chess were created, the motives of which are repeated in the “King”. These are stylized and abstractly brought geometric shapes, in which, however, classical chess images are easily recognized.

Chess symbolism has been repeatedly used in art and literature, but only Max Ernst managed to concentrate so much sense in the concise sculpture group. In the “King playing with the Queen”, each person can see many different references to both ancient knowledge and information of modern and relevant.

The most interesting is the central figure of the composition. King, Architect of the Universe, Lord God, Satan, a mysterious alien with Teutonic horns or a crescent of Diana-Hunter – choose for yourself who you associate this image with. A “robotic” square person, devoid of human traits, a flat torso without sexual characteristics, long subtle limbs – this is an abstract image of Eternity that plays the chess part of life on the board of logical concepts.

Everything is symbolic in the sculpture, even the name. You might think that royal persons play chess, but the Queen here is a chess queen made on a larger scale than other figures. And here lies a subtle hint – the Queen is more important than simple “dead” chess pieces, but immeasurably smaller than the King, who personifies power – human, divine, natural, supernatural. Ernst’s genius is manifested in how he managed to reflect so many philosophical concepts in a restrained composition and put a multilayer deep meaning into the sculpture.