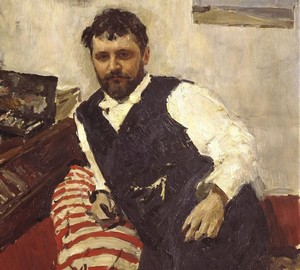 Brothers Korovin is an interesting phenomenon in Russian history, as both come from wealthy merchant families and both chose the artistic field. This is largely due to the great education received Korovinii in childhood and adolescence. The elder brother of Konstantin Sergei, a famous Russian painter and graphic artist, the continuer of traditions of Russian artists, the Wanderers.

Born Konstantin Korovin in 1861 into a wealthy Moscow family of merchants. At the age of 14 years entered the Moscow school of painting, sculpture and architecture. After a year, he transferred to the painting Department, where he was fortunate to learn from such masters as Savrasov and Polenov.

Moving to St. Petersburg and enter the Academy of arts did not bring the future artist anything but disappointment – he did not like the teaching method that was practiced there.

From 1887 to 1893, the artist visited several times in Paris, the former then recognized centre of the arts. Here he became acquainted with the rapidly developing new direction in painting – impressionism.

Together with Serov, Korovin traveled to the North in 1894, where he brought a series of interesting landscapes.

1900-e years became the artist with the time of active work in the theatre. He worked on sets and costumes for different plays, including “the Golden Cockerel”, “the humpbacked Horse”, “Sadko” and “Faust”. Korovin designed the plays in Russian theaters, the Mariinsky and the Bolshoi, but was also invited to Italy, where he worked in the famous La Scala.
Creative perception and artistic style was greatly influenced by impressionism and Paris. This town becomes the subject of the image in many of his paintings. Master surprisingly subtly managed to convey the colors and the special atmosphere of this “city of the arts”.

There he developed interest in another fashion direction in painting – symbolism. During these years he became friends with famous poet Balmont and has written several impressive works, including the painting “the Muse”.

The first World War interrupted the active artistic activity Korovin – in the years he had the opportunity to serve as an Advisor on camouflage at the headquarters of the Russian army.

After the war, master much involved in the exhibitions of various art associations, and since 1901, besides teaching in the school of painting, sculpture and architecture in Moscow.

Korovin’s talent manifested itself not only in painting and decorating art. His project was built a private house of an artist and a rural house of the famous singer Fyodor Chaliapin.

The revolution in Russia Korovin has made an active defender of the historical values and monuments of art. He worked in theaters and participated in the auctions, did not leave their active life position.

Thanks to the people’s Commissar of education Lunacharsky, the artist in 1932 was lucky enough to leave red Russia to France. Health much summed Korovin – he lost his eyesight. But even in such a critical condition he continued to work. Being deprived of the opportunity to study painting, he switched to writing short stories.

He died in 1939 in his favourite Paris. After his death, left a considerable artistic heritage. A significant part of surviving in Russia, work is now in the Russian Museum in St. Petersburg. But the master left behind not only material but also spiritual heritage – many of his disciples, which he was able to instill a love of art and to teach a particular vision of the world.