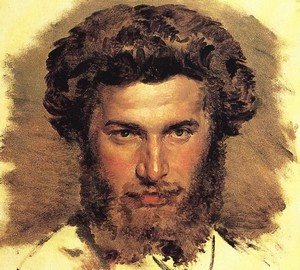 There is no history of talented artists who would live a normal, bland life, full of happiness and success. All because the talent is always, always ahead of his time, has always experienced the need of like-minded people. But in General a difficult and tragic background, life Kuindzhi seems to be quite successful and happy. But this is only at first glance.

The son of a Greek shoemaker Kuindzhi Arkhip was orphaned early. Large Greek family, so the future artist managed to escape the orphanage. He was brought up in her uncle’s house and didn’t feel the least deprived. Formal education he never received, despite the fact that his guardians sought to Arkhip was educated. The boy was only interested in one thing – a painting or drawing. His colleagues on the school Desk remembered that nothing could tear off the name from his favorite activities. As a basis for their artistic experiments, young Kuindzhi used all that caught his eye: fences, walls, sand beach, announcement posts. Study time was not.

Family where he was educated Arkhip Kuinji was large, but very poor. Therefore, the future great master was accustomed to work from a very young age. Worked on construction sites, in shops, bakeries. In the bakery on his passion for drawing and drew the attention of the owner, one guardian. On his advice, Arkhip sent to the Crimea, Aivazovsky to be asked to the students.

Aivazovsky did not see a young and brash teenager’s special talents and encouraged him to paint the fence and generally helping out around the house. Condescended to learning Arkhip cousin of the great marine painter. He gave a few lessons to the young Greek. Three years in the Studio of Aivazovsky were not pointless. Kuindzhi (name change was due to her Turkish sound that does not simplify the life of an artist in Russia) had learned to mix colors and even create your own shades, which aroused the respect of even the great wizard.

At the age of 17 Arkhip hinted that it is time to start an independent life. He did so, sitting in the workshop… to the photographer! Five years Kuindzhi carefully retouched negatives from a famous photographer. Success in this difficult case was so shiny that Arkhip strongly advised to think about starting your own a photo. A businessman from Arkhip did not work, but the idea…

In 1865, at the age of 24 years, Kuindzhi went to St. Petersburg. He’s trying to go to art Academy. To no avail. The next attempt also was in vain. The third time Kuindzhi went to take the exams, taking with him his first independent picture. The admissions Committee carefully studied the painting (the painting has not survived, we know only the name – “the Tatar hut in the Crimea”), came to the conclusion that the author it is possible to assign the title of “free artist”. Was given the title opportunity, but he gave no income. It is known that took Kuindzhi at the Academy only two years later.

The Academy was not finished. As soon as the skill Kuindzhi was recognized by the public and critics, Arkhip considered their education complete. 70-ies of the XIX century became the period of blossoming of creativity of the artist. Each new work was made with extraordinary rapture. Criticism was excited, the audience brought down the shaft to the exhibition.

It was at this time and have a happy marriage Kuindzhi, the daughter of a wealthy merchant, triumphant accession to the group of “Wanderers”, the search for new colours and ways of depicting light. The ability to transmit light in the paintings of Arkhip Kuinji attracted and surprised most. The artist first staged mono-exhibitions in darkened halls, seeking by aiming at a picture of the beam of the electric light striking effects.

Society expected from the master exclusively of masterpieces and nothing more. A decade of hard work had exhausted artist. His painting “Dnepr in the morning” has not caused a stir, the criticism took the job very cool. For Kuindzhi, it was a tragedy. The artist breaks with the “Wanderers” and ceases to exhibit paintings. Seclusion lasted for 20 years…

All this time Kuindzhi worked hard, leads the class at the Academy, but does not put any work in. Researchers still are puzzled about the reasons for such a long “silence”. Put forward different versions: from the banal to the creative crisis, to intense exploration of their new manners. One thing is, during this period the artist created nearly two hundred sketches, which are now accepted as the finished work and perfect examples of Russian impressionism.

In the early twentieth century “silence” is interrupted. The wizard exposes several works and produces a sensation. The last years of his life Kuindzhi unusually rich. He works at the Academy, often goes in the open air, actively involved in charity work.

Generosity Kuindzhi admirable. It funds working visits of young artists in Europe, establishes scholarships for students of the Academy creates its own Fund. These were the years of recognition, fame and prosperity.

Kuindzhi died from pneumonia, which managed to catch the hot summer of 1910 in the Crimea.