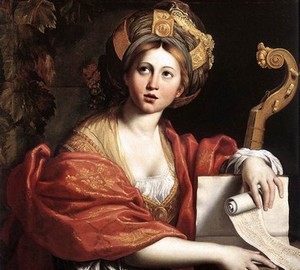 Kumi Sibyla – Domenikino (Domenico Dzampieri). Around 1617. Oil on canvas. 128×94
In this picture, the artist, for whom antiquity was an inexhaustible source of inspiration, depicted the Kum Sibyla, one of the ancient Roman diviners who were called at their place of residence.

The ancient myth tells that Apollo, who fell in love with the girl, gave her the ability to predict and the opportunity to live for a thousand years, but her beloved forgot to ask for eternal youth. Domenikino portrayed her young, blooming, with a blush on her cheeks and chubby lips dressed in a rich turban and a magnificent dress, with a cellar standing next to her. The girl holds a scroll in her hand, her prophecies are recorded on him, and opened a book where she also spoke about the fate of the world. The appearance of the young sivilla is full of trepidation, because she knows secrets inaccessible to others, and also because the painter clearly admired his model with which he wrote ancient heroine. At the same time, in her position, calm gestures of her hands, inner greatness is felt. The desire for high image harmony, expressed here, was characteristic of the art of classicism, one of the immediate forerunners of which was the master.