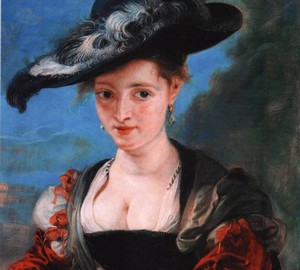 Peter Paul Rubens (1577-1640) is a great Flemish artist, like no one else who embodied the vitality and sensuality of European baroque painting. Although he was famous for his extensive work on mythological and religious topics, he was also a virtuoso master of landscape and portrait.

A hat is such a characteristic detail in this work that often the word “dam” is omitted from its name. How many generations of viewers have heard, read in books, examined a picture with this name, without “stumbling” about its absurdity! Is the hat here straw, especially with such a feather? Of course, this is a luxurious felt hat, fashionable in the XVII century. Rubens wrote himself in it more than once. A mistake in the title arose in the XVIII century in France, where in one of the catalogs of the artist’s works the canvas was recorded: “Le Chapeau de Paille” (“Solomenon Hat”). This, of course, is a typo: instead of “paille” there should be “poil” (from French – “fat”).

The picture depicts a beautiful woman – Susanna Furman, daughter of an Antwerp merchant of tapestries and silk, who got married. The master wrote her wedding portrait with a wedding ring, which attracts attention and could, like a hat, appear in the title as a distinctive part of the work.

In 1630, Rubens married her younger sister Elena. He created an equally delightful portrait of his wife in a similar hat, where no one called her “solomenous.”!