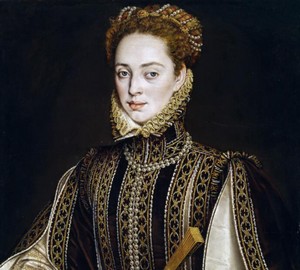 Despite strict adherence to the canons of the Spanish ceremonial portrait, in Coelo’s paintings the faces of the characters remain alive, retain their characteristic expression, a special sparkle of the eyes. Static poses are not only a tribute to traditions, but also the result of wearing a very tough and heavy ceremonial costume that restrained all living movements like a real shell.

A portrait of a lady with a fan is a vivid example of the master’s work. A very tall, hard collar, tight corset and a lot of gold finishes do not allow the young lady to move, but even breathe freely. But her face is expressive, sadness has frozen in big eyes, fragile white hands hold an indispensable attribute of any Spanish aristocrat – a folded fan.

This young woman with curly reddish hair is literally chained in a very expensive and luxurious outfit of dark brown, chocolate shade of velvet, which will be covered with golden threads. In the incisions of the sleeves, no less expensive golden silk lining and sleeves of the lower dress of golden brocade are visible. A very high collar with a flat golden finish supports the head, giving the lady a noble posture and a slightly arrogant look.

A few pearl threads are worn on the top of the dress on the young woman, and the fingers are decorated with numerous golden rings with precious stones. No less magnificent is the haircut. It uses exquisite golden diadem, and hard braided hair is wrapped in pearl threads. All this is designed to emphasize the high status and wealth of the portraised.

Despite the highest artistic skill in the image of such detailed details, the face of a woman attracts great attention. In this pompous gold frame, only it looks truly alive. The master was surprisingly well able to convey the spirituality and special expressiveness of the face, which is rarely found in such a tightly regulated genre as a ceremonial portrait.