Landscape from the tower, David Tenirs the Younger 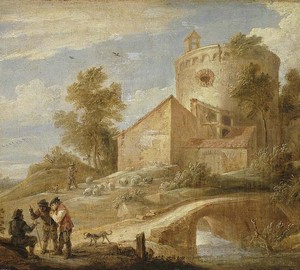 Landscape from the tower – David Tenirs the Younger. The middle of the 1640s. Oil on canvas. 17.4×25.3
My central composition is occupied by a high round tower, at the foot of which are visible economic buildings. Near them there was a shepherd with a flock of sheep. The silence and peace of the summer day, when time seems to have stopped, reign in the picture. It was created by an artist in the mid-1640s. During this period, a golden gon predominates in the color of his works. The three talking peasants and a small dog, depicted in the foreground, give the landscape a genre character. To the left of these characters is a road pillar with a sign – a motive that occurs in a number of paintings by Tenirs. The analogy of “Landscape from the Tower” is the picture “Treating the Three Peasants (After noon)”.