Landscape with a grotto and a group of gypsies, David Tenirs the Younger 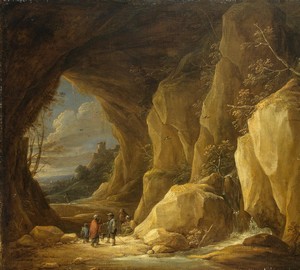 Landscape with a grotto and a group of gypsies – David Tenirs the Younger. Oil on canvas. 1640s. 51.7×63.5
The canvas refers to the works of the painter created in the early 1640s. In this early landscape composition, the influence of the work of Jos de Momner is no longer as noticeable as in the Mountain Landscape. Here Tenirs acts as a completely independent master.

Depending on the subject of the image and on the task, he changes his manner within one picture. So, tiny figures (in the scene of the prediction of the fate of a gypsy-gadalka) are interpreted very picturesquely. The rocks, on the contrary, are outlined in hard contour and are more rigorous in the picture. Their bizarre forms have something in common with the romantic silhouette of a castle towering in the distance on the mountain.