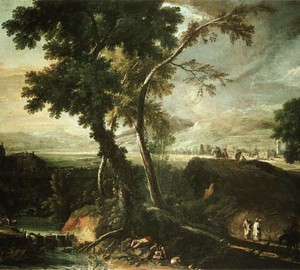 Landscape with flow, monks and laundresses – Marco Ricci. 1715-1720. Oil on canvas. 136×197
Marco Ricci (1676-1730), nephew of Sebastiano Ricci, is the founder of the 18th century Venetian landscape painting. In his uncle’s compositions, he often performed landscape backgrounds. It is assumed that marine species in the works of Allessandro Manyasco also belong to his brush.

In his pastoral landscapes, Marco Ricci, using the Venetian technique “pittura di macchia e tocco forte” (“painting stain and dynamic smear”), variedly conveys atmospheric nuances and always contrasts the romantically excited nature (usually with large masses of trees) with small genre scenes surrounded. In this regard, the question always arises whether his famous uncle wrote the staffachy figures? It is interesting that the compositions are inspired by natural impressions: the artist went from Venice in search of suitable motives
in her neighborhood. The presented canvas captures places in the Pieva Valley, the birthplace of a painter.

Marco Ricci was a universal artist – painter, decorator, cartoonist, graphic artist. The ZZ of engraving landscape has been preserved, in which, as in gouash and pastels, his interest in the problems of illumination is observed.