Landscape with shepherds and herds, David Tenirs the Younger 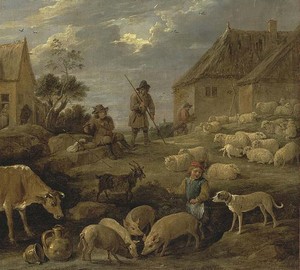 Landscape with shepherds and herds – David Tenirs the Younger. The middle of the 1640s. Oil on canvas. 51.7×80.3
In the old ermitage catalogs, the picture was called “Combatted Trading.”. Indeed, on the left, in the background before the zucchini, the scene of the conclusion of a deal to sell livestock is shown. Among the crowding peasants, two characters hit each other in the hands as a sign of the completion of the trade transaction. A similar plot is presented in the painting by Tenirs “Krestyan selling cattle in the inn”. In the center of the ermitage composition, in the background, shepherds are represented, one of which plays the flute. A close-up is the herd – sheep, cows, pigs, goats. Tenirs demonstrates the remarkable skill of an animalist artist. Light golden tones that dominate the color allow you to date the picture in the mid-1640s.