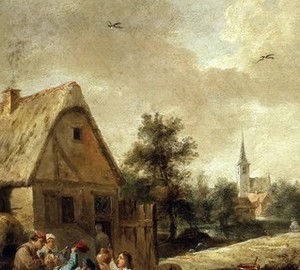 Landscape with a village zucchini – David Tenirs the Younger. 1644. Copper, butter. Diameter 40.5 (circle)
Among the peasants who were drinking at the table, the artist introduced a man in a white shirt, with a jug in his hands. Perhaps the image of this character and the pig next to him contains a hint of the story of the prodigal son. In the works of the first half of the 1640s, Tenirs addressed this topic repeatedly. In particular, the plot of the prodigal son was reflected in the artist’s paintings stored at the Institute of Arts in Minneapolis (about 1640) and in the Louvre in Paris (1644).

In the Louvre composition, which depicts two episodes from the gospel parable about the prodigal son, the figure of the pig-bass on the right in the depths of the pose and appearance resembles a man in a white shirt on the Tenirs ermitage painting, performed in the same 1644.