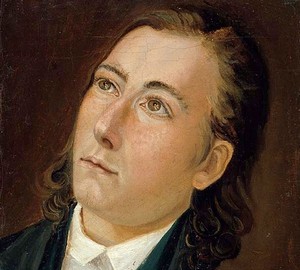 If you have read the novel of the writer from Norway yuna Fosse “Melancholia” or watched performances of this work, it is amazing and sad story of fellow Creator, artist Lars Hertwig you should be somewhat familiar.

This man was born in 1830, showed considerable makings of a painter and at age 22 began to study with Hans Frederik Gude at the Academy of arts Dusseldorf. It’s only been two years since the talented young man showed signs of schizophrenia. Study became impossible, and he had to return home.

Lars settled in the South-West of the country, close to Stavanger. The rest of his life will take place under the influence of various mental disorders. He tries to cope with the problems, going to be treated the Mediterranean sea. But stay in the safe climate has not had a favorable impact on the health status of the artist, and on his return home he went to a psychiatric hospital in the Norwegian capital, Oslo. But here he failed, and the fate of a talented person was a foregone conclusion.

Lars lived for 71 years, but more than three decades lived in terrible poverty, without giving up only one good painting. Money on quality materials he lacked, so he used plain paper, gouache and watercolor. His work has a clear imprint mental disorder. This charming countryside of Stavanger, passed through the prism of its unusual perception of reality. Places in the paintings are recognizable, but they look like they are overlapping fragments of a parallel reality. Trees and rocks are becoming a whimsical, fantastic shape and unusual proportions. Particularly pronounced deviations in the perception of reality by Lars appear after 1860, when the disease begins to progress.

It’s not vague, indistinct contours, and very clear, with a large number of small parts of the picture. On all the canvases there is a blue sky with spectacular clouds of the air. Perhaps this reflected the artist’s desire to see the world a little bit different, more bright and clean.

Last years masters were in the house of charity. As an artist he barely knew, only 12 years after the death took place the first exhibition of his works. He died in 1902. Now for a special vision called the “painter of light”, in honor of him called the square and the streets of Stavanger, his house is preserved for future generations. What a pity that the recognition often comes only after death.