“Lot and his daughters,” Albrecht Altdorfer – overview of the painting 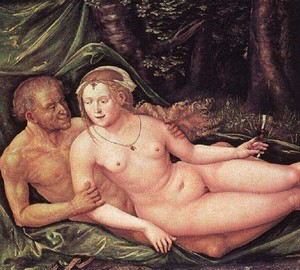 The story of Lot and his daughters was embodied in the painting by the Danube painter of the Northern Renaissance Albrecht Altdorfer. A year before the death of the master, this work appeared, written in the spirit of mannerism.

The father of the family, old Lot, fleeing the burning Sodom, lost his wife. She, despite the command of the messengers of the Lord not to look back at the dying city, did it and turned into a salt pillar. Lot’s daughters accepted the destruction of the sinful Sodom and Gomorrah at the end of the world and felt that they were the last women on earth. Their duty, the daughters decided, to prevent the human family from disappearing and “caught” with their father Lot, before that, having drunk it. The topic of Lot incest with daughters can be found in the works of Francesco Furini, Adrian van der Verff, Domenico Maroli, Jan Muller, etc. As we see, a delicate plot was popular with painters, so it is not surprising that Altdorfer ultimately drew attention to it.

In the foreground, Albrecht Altdorfer in full growth depicts a hop Lot with one of his daughters. The second daughter, also naked, can be seen in the distance – she is either sad or suffering, condoned by envy of her sister. The master depicted the intimate scene with frankness quite bold for those times – the impudent heroine lies on the lap of her father, who hugs her with two hands behind her forearms. In the hands of her daughter is a glass of red wine, she smiles, glancing playfully in the face of her father, and he looks predatory in response. It can be seen that the girl prepared for this “date” – the head is decorated with some exquisite pattern, and on the neck there is an elegant chain with a ruby pendant.

It is easy to note how the technique of depicting the human body of Altdorfer has changed – from a sketch and approximate to an “Italian model” full of realism and nuances. We notice the protruding ribs of the thin Lot, feminine bends with the underlined waist of his mistress.

Everything unfolds, as is found in Altdorfer, against the background of the landscape, but now the author adds here fabric, a color whose drapery emphasizes the pallor of naked bodies.

Noteworthy is the coloristic performance: the author managed special lighting, so the bodies of the heroes in the picture seem to be shining. A subtle drawing of details, a play of light and shadow, color saturation are noticeable. Undoubtedly, we have a mature work, a demonstration of the crystallized style that has developed over the years … and the last picture of the Altdorfer brush. After her, the painter will write a few more frescoes, which are preserved only fragmentarily.