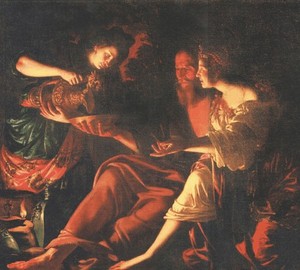 Lot with daughters – Giovanni Francesco Gverrieri. 1617. Oil on canvas. 145×165
The influence of Michelangelo Merizi da Caravaggio on European painting gave rise to a whole direction called “caravajism”, one of the representatives of which was Gverrierei (1589-1657).

The picture depicts an episode from Lot’s life after he left Sodom, who was exterminated by God along with the inhabitants for the lawlessness of those. The action takes place in a cave where the righteous settled with two daughters.One of the daughters brings his father a bowl of wine, the other staggers at what is happening.

The scene is snatched by the fire of a lamp from the darkness. Caravaggio completely and nearby resorted to the use of magical lighting, often occurring from an invisible and incomprehensible source. The followers of the artist, who adopted his reception of contrasting light, often depicted a candle in paintings or, as in this case, a lamp. Therefore, if Caravaggio has an alarming mood on the canvases, then many caravajists and the Doverrierei among them achieved the exact opposite effect: coziness, warmth of the depicted. The sense of mystery of what is being demanded by the plot fills this work.