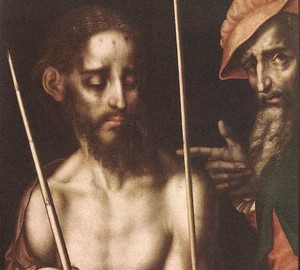 The life and career of Luis de Morales, Spanish painter known, little studied, is full of mysteries and historical innuendo. Still hard to tell who was the teacher of the painter and how he developed his unique, easily recognizable style. The works of Luis de Morales full of personality and very original. In Spanish art the artist’s work stands apart is often associated with life in the province, and therefore, the lack of influence of the fashionable artistic movements.

The first mention of the name master refers to 1546. It is known that Luis de Morales was born in one of the most backward and quiet region of Spain, Extremadura, in the small town of Badajoz. The tumultuous events associated with constant skirmishes on the Portuguese border, and the absolute domination of the rich feudal families had long ceased to disturb the life of a provincial town.

In Badajoz Morales lived in a big way, was known as a sociable, pleasant and honorable man. Had his own workshop, stone house, small stables and a staff of servants. The artist actively collaborated with the city Council and enjoyed the special patronage of the Bishop. Orders have dried up and in the workshop of Luis de Morales, over time, began to help the sons of Cristobal and Jeronimo.

The early works of the master are unique altar paintings, which Morales has painted the Cathedral and the nearby Church. The undeniable talent of the young artist was noticed by the Bishop don Juan de Ribera, an outstanding religious leader, a brilliant representative of Spanish Catholicism and philanthropist, who later became Archbishop and Viceroy of Valencia. In 1560 the years Bishop has become the main customer of the painter. Work Morales decorated the office and the chapel of the Episcopal Palace. Moreover, a painter, not a portraitist, he painted the well known portrait of the young Juan de Ribera, in which he managed to convey a profound and rich spiritual world of Bishop.

However, the life of Luis de Morales was not limited to the operations in Badajoz. Around 1561 the artist was invited to the court of Philip II, but presents a picture of “the way of the cross of Christ” was not to the liking of the Spanish king, and Morales returned home. There is also a suggestion that the painter visited Italy – a trip to Seville could mean the acquaintance with the works of Dutch and Italian representatives of the mannerism. A few months the master worked in the Portuguese towns of Elvas and évora, but most of the time, Luis de Morales spent painting the picturesque altars in the churches of small Spanish cities.

Quiet, isolated life in a small town left a mark on the master’s works. Despite the apparent archaism of Morales paintings, each masterpiece is unique, presenting a distinctive mixture of religious exaltation, mystical echoes of folk culture, medieval piety, the expression of the Dutch school of painting and refinement of the Italian masters.

At the end of the artist’s life tend to spend and waste suffered need. A small pension granted by Philip II, helped rescue the wizard from starvation, but in recent years, Luis de Morales and failed to improve their financial situation.